INSTANCES OF THE NUMBER 2

At our Sunday evening forum in Wychwood Library we recently dipped into Jonathan Sachs’ book The Great Partnership, a book about bringing together two very different approaches to understanding the world. The third section of the book is entitled Faith and Its Challenges. In the chapter ‘Where Religion Goes Wrong’, Sachs bravely tackles a number of instances of religion getting a bad name, sometimes with good reason.  He mentions five ‘hazards’ to which he admits the Judeo-Christian tradition has been prone, of which one is Dualism.

Dualistic thinking seems to be everywhere these days.  Chambers English Dictionary defines philosophical dualism as a view which seeks to explain the world by means of two separate elements, as in spirit and matter or good and evil.  It is to the second of these that Sachs refers.  The conclusion it is tempting to draw from the existence of ‘unjust suffering’ in the world, he says, is that there must be ‘forces of evil, as an independent, active force, apart from and opposed to God’.  With the Woolwich massacre fresh in our minds and the ensuing attacks on mosques, it is all too easy to recognise this sense of good and evil, of judgment, violence and vengeance. 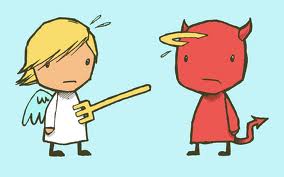 And do we not recognise in our own instincts the sort of dualism of the sort Sachs decries?  From the playground  where it remains trivial (“It wasn’t me; it was him”) to war zones and fascist states where it  goes to the other extreme  (“it’s not us; it’s them”) mankind sets up a dualism which spares us (and our god?) and blames the others: the outsiders, those who are different or disabled or unemployed or have a different religion or ethnicity or nationality.  Look at Nazi Germany, or the Balkans, or the Middle East, or Woolwich and its aftermath.  As Sachs rather dramatically puts it: ‘There is a straight line from dualism to demonisation to dehumanisation  to genocide.’

Sachs’ answer is simple, even if it would need a sermon to unpack it: ‘The most powerful antidote to dualism is monotheism.’  Monotheism, he says, ‘refuses to split light and dark, good and evil, into separate forces or entities’.  Sachs’ God created them all and encompasses them all and ‘forces us to wrestle with the ambiguities of our own character, the necessity for moral choice and the inescapability of personal responsibility’.  Tell that to the reasonable-sounding Tommy Robinson of the EDL.

Another related instance of dualism is found in a recent book about what one might call “spirituality for the ageing”!  Dualistic thinking is here not spirit and matter, nor good and evil, but rather what the author calls ‘the well-practised pattern of knowing most things by comparison’.

We are all happier knowing where we are in terms of up or down, in or out, right or wrong, for me or against me, black or white, gay or straight. But Richard Rohr, a Franciscan priest addressing a Christian audience albeit with an intriguing Jungian agenda, says this dualistic thinking is characteristic of a ‘first half of life’ attitude.  In his book subtitled A Spirituality for the Two Halves of Life, he says we need to build on this phase but also move on from it into what Jung called the ‘second half of life’.  A new capacity for ‘non-dualistic thinking’ or ‘both-and thinking’ is, he says, ‘almost the benchmark of our growth into the second half of life’.

As someone who definitely hit the stereotypical mid-life point some time back, I have asked lots of new questions and been dissatisfied with the traditional answers.  I have also looked back at what my own first half of life was like and I found a lot of resonance in Rohr’s book. Dualistic thinking is necessary in the first half of life in order to draw boundaries and set up clear goals.  We desperately need to find an identity – so much easier if we can do so by excluding what we are not or wouldn’t want to be.  But this approach exists only through comparing and labelling, judging and polarising.

The danger, as Rohr sees it, is that we get trapped into this way of thinking: Most people do not see things as they are; rather, they see things as they are. …  Buddhism has helped people see this in themselves probably better than most of the world religions. … In the first half of life, the negative, the mysterious, the scary, and the problematic are always exported elsewhere.  Doing so gives you a quick and firm ego structure that works for a while. [But]… Eventually this overcompensation in one direction must be resolved and balanced. This integration … is the very name of growth, maturity, and holiness.

There is more than just an echo of the ‘divided brain’ analysis here.  If you are looking for balance and integration, start with an understanding of how your own brain works! Which of course was the principal thesis of Jonathan Sacks’ book.  Using the still relatively new concept of the divided brain he works on the premise that the two hemispheres of our brains lead us into contrasting but compatible, or even ‘more than compatible’, views of the world.  As Sachs explains:
Since Pierre Paul Broca discovered the location of language-processing skills in the left side of the brain, neuroscientists have come to understand the marked difference between the brain’s two hemispheres and how they process information. The left hemisphere tends to be linear, analytical, atomistic and mechanical. It breaks things down into their component parts and deals with them in a linear, sequential way. The right brain tends to be integrative and holistic. 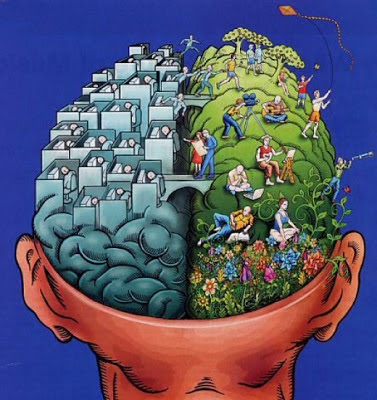 A much bigger book, Iain McGilchrist’s The Master and His Emissary: The Divided Brain and the Making of the Western World, goes further and suggests that western civilisation has for several centuries been adversely affected by the predominance of the left hemisphere in our thinking.  What may be most challenging to us in our self-confidently scientific modern world is the possibility that we took a wrong turn a couple of hundred years ago and are not as clever as we think!  Mary Midgley’s summary of this huge book in a Guardian review of January 2010 is provocative and striking :

McGilchrist's suggestion is that the encouragement of precise, categorical thinking at the expense of background vision and experience - an encouragement which, from Plato's time on, has flourished to such impressive effect in European thought - has now reached a point where it is seriously distorting both our lives and our thought...

But is this about dualism or dualistic thinking?  The Guardian review is worth quoting at length, not least because it asks whether the origin of this split way of thinking and the subsequent predominance of the literalist and empiricist view does in fact lie in dualism of the spirit/matter variety:

Our whole idea of what counts as scientific or professional has shifted towards literal precision - toward elevating quantity over quality and theory over experience - in a way that would have astonished even the 17th-century founders of modern science, though they were already far advanced on that path. ... And the ideal of objectivity has developed in a way that would have surprised those sages still more.
This notion, which now involves seeing everything natural as an object, inert, senseless and detached form us, arose as part of the dualist vision of a split between body and soul. ... It therefore showed matter itself as dead, a mere set of billiard-ball particles bouncing mechanically off each other, always best represented by the imagery of machines. For that age, life and all the ideals relevant to humanity lay elsewhere, in our real home - in the zone of the spirit. ... But the survival of this approach today, when physicists have told us that matter does not actually consists of billiard balls, when
we all supposedly believe that we are part of the natural biosphere, not colonists from spiritual realms - when indeed many of us deny that such realms even exist - seems rather surprising.

It is a massive book but a fundamental one to our human journey – and I may say that it is quite possible to dip into it and miss out the more technical and mathematical chapters.  The final word on his theme should go to Iain McGilchrist himself:
We have been sold a sadly limiting version of who we as human beings are, and how we relate to the world.  Inside each one of us there is an intelligence, in fact a superior intelligence, that sees things differently from the way we have been told - if we would only listen to it. Let's hope that we can.

A suggestion emerged at the end of a fascinating Cheltenham Science Festival event this month on the so-called ‘non-overlapping magisteria’ of science and religion.  Actually -  the immunologist and bishop of Swindon advanced - they do overlap and that overlap is precisely where we really get talking about ‘what it is to be human’.  Which is as good an anti-dualist point as any to round off this post.