SWEET ARE THE USES OF ADVERSITY

PROBLEMS CAN BE ADVANTAGES

The talk on March 11th will offer us a practical experience with Shipton resident Ruth White on how we can change our attitudes, re-looking at our so-called problems and turning them to our advantage, or as Shakespeare put it:

Sweet are the uses of adversity

The audience may choose to try a few simple stretches which Ruth will demonstrate and which can have an effect on both energy levels and attitude. 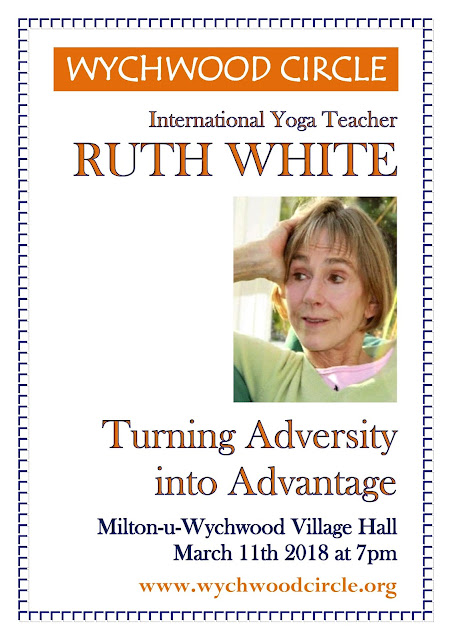 RUTH WHITE has been an international yoga teacher for some 40 years and has taught in 25 countries. She recently held seminars in Europe and Australia and has published a book entitled 'The Truth of Yoga'.  In 2004 ten Ishaya monks came to live in Lane House Farm, Ruth's home, and both she and her husband John became Ishayas too.  Their philosophy is based on A Course In Miracles. There is much more about Ruth and her courses on her website here.
Posted by Wychwood Circle at 02:00 No comments:

OUR CULTURE IS OBESE

We're all out of shape

Most of us probably know the facts, that obesity is the greatest public health crisis facing the USA and the UK (how embarrassing to be put in the same bracket...) and Sam Wells thinks it affects us all to some degree: he is interested in 'what obesity symbolises in our society'. Broadening out from the church (which is where his professional interest lies), he makes a powerful point about what obesity means for society as a whole, beyond the public health epidemic:

Referring to what the Greeks called telos, or ultimate direction, he wonders whether our society actually knows 'what all this education and wealth creation and health provision and military protection is actually for'.  And, addressing his Christian audience with its tradition from Abraham and Moses onwards:

For those with a different affiliation he still has a point: does our society, do we, have any sense of 'such an overarching purpose that it's worth getting in shape for'? Is there anything our society is shaped around, besides money and choice - which Wells here castigates 'as mere holding areas leading to multiple goals that our society is reluctant to name'.


What do you want?

It is hard to resist this - at times emotional because heartfelt - challenge to our deepest motivations. We may not be St Paul, whom he sets up as someone who really knows what he wants, nor even church-goers, or 'religious' in any way. But his final words in this chapter bear thinking about for at least the length of a Wychwood Circle discussion:


Look at your life. Is it easy to see what you want? What do you want?

Maybe that's a first requirement for answering the overall question: How then Shall we Live?


Join us, having read Part Two of Wells' book (see earlier posts), to discuss this and other issues about 'Being Human', at Wychwood Library on February 11th.  Please email in advance to signal your participation.

Posted by Wychwood Circle at 03:17 No comments:

LIVING IN ACT 4 OF A FIVE-ACT PLAY

From the seven-scene drama of the chapter on Disability, we move to what may well be the core of Sam Wells' approach to faith, his vision of the five-act human drama, narrated in this context to find a place for both Christian identity (not before time?) and then alongside it and within it for LGBT identity.  Whatever our reservations about Wells' essentially biblical faith and the importance he gives to Act 5 as the 'full realisation of the kingdom of God', there is no doubting the power of this drama.

Act 1 is the creation, from the beginnings of the whole 'cosmic canvas' to the emergence of consciousness and 'creatureliness as a companion to and reflection of God'.  Act 2 is the long and convoluted Old Testament story of the Jewish people through enslavement, liberation, exile etc etc. Act 3 is obviously the story of Christ, the central act (for the Christian) of God's incarnation in our little world.


In Act 4 our vocation is not to look to a template of spotless purity or obedient citizenry but to allow ourselves to be swept up in the adventure of the kingdom, inaugurated in Jesus and completed on the last day; and our relationships are evaluated not by looking them up in the owner's manual but by communal discernment as to whether they strengthen the community in its daunting challenges to embody God's glorious future in an often hostile present. 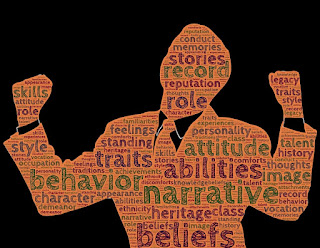 To be a Christian, says Wells, is to switch (whether dramatically or gradually - dare one say? - or even imperceptibly) from seeing ourselves in a one-act play to this context of a five-act play and in particular to this 4th Act in which we have our existence, suspended between Acts 3 and 5. Since we only live in our own time we must take both what we believe about Act 3 and what we expect or hope for in Act 5 on faith, but as we have seen before at Wychwood Circle that is not to dismiss either as unreasonable or even improbable.  What this vision does provide is an understanding of Christian identity. one where no single Act makes sense on its own or provides the definitions or rules that some may yearn for.  And in Act 4, says Wells, there is both liberation and discipline, the latter being essentially the desire to be 'faithful to the character of God revealed in the first three acts' and anticipated in Act 5:


[B]eing a Christian in Act 4 doesn't mean keeping one's nose clean and holding one's distance from anyone who looks suspiciously like they might end up in the wrong queue on judgement day. On the contrary, it means finding ways to be with those with whom one will be spending eternity ...

And so to three judgement calls which we may be reluctant to make but which are essential to understanding sexual identity, both socially and theologically: 'The first call is whether sexuality is something you do or something you are'. The second is the relationship between LGBT people and the largely heterosexual society at large, particularly if sexual identity is integral to human identity. Wells gives three extended answers to this question, including this point, comparing humanity to a football team or a newspaper editorial process where there are many roles and many kinds of people are needed:


A narrow binary gender distinction between male and female impoverishes human life by assuming there are a very limited number of key activities and roles, focused around reproduction, security of shelter, food and clothing, and nurture of children. But in most of the world today the understanding of human flourishing goes beyond these narrow Darwinian contours of personal and species survival. 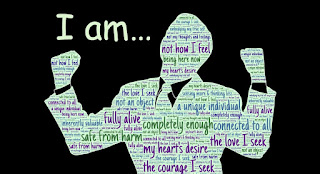 If we all have roles to play in this world this leads back to the idea of vocation, which Wells has touched on in earlier chapters and which he now names as the third judgement call for Christians:  'How significant is sexuality for the whole of our lives before God?'  In the same way as he wants people to see their lives 'located between Act 3 and Act 5 of the five-act play', he now says that vocation 'requires the whole of one's identity'.

So for Wells, while the church should be asking itself what kind of people it needs to fulfill its mission in Act 4 - by implication, all sorts, obviously, all of whom bring unique strenghts and insights - individual Christians may also ask themselves (in words resonant of the Book of Common Prayer), 'what kind of a life do I need to live if I am going to support such a community and in its service find perfect freedom?'

'In the front seat of the van'

And the role of LGBT people? Well, they should know about being marginalised and scapegoated, rather like 'those people closest to Jesus' heart, Jesus' company and Jesus' ministry'. They also by their very nature 'break the assumption that human existence is indelibly tied to reproduction'. And his third point is perhaps uniquely perceptive and relates back to the first chapter in Part Two, on Family and the breakdown of the so-called nuclear, or industrial, family 'which no longer reflects the social and economic reality of a critical mass of the population' (p 68):


LGBT people are ahead of the majority population in exploring the longevity and sustainability of desire and tenderness that is neither upheld by the sanction of social endorsement nor cemented by the responsibility of offspring and nurture.

Redefining marriage and the shape of the post-industrial family?

Nothing pious or specifically for Christians or people of faith there: it's a social issue that we could all do with pondering.  And on marriage, such a preoccupation of the poor old Church of England if not for the rest of us, (and the theme of a separate chapter):


[P]erhaps the question in our generation should not be 'Have LGBT people any right to be married?', but rather 'Can the church begin to redefine marriage for a very different era without the wisdom and experience LGBT people can bring?'

In a book that bravely tackles a whole range of issues, mostly in chapters of five or six pages, this chapter is unique, as well as central, in occupying nearly 17 pages.  It is almost as if the rest of the book has been constructed around it - but that is a wild guess if ever there was one.  Relevant as 'identity' is in our culture, it could nevertheless be the one topic which we should recommend to others who may not want to read the remaining 26.  But that is to prejudge what gems may yet emerge in later, denser chapters.