We'll be restarting our monthly meetings soon, on Zoom and then in Milton Village Hall when the time is right (more details to follow soon), but meanwhile you may be interested in a new group that's starting this month in St Mary's Charlbury: 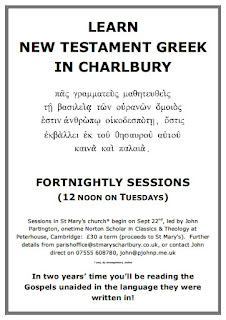 Click on the poster to see a clearer image!
Posted by PJohnP at 05:54 5 comments:

Two fascinating books have, thanks to the generosity of friends, come my way as I stood back from Wychwood Circle: How The World Thinks (Julian Baggini) and The Righteous Mind (Jonathan Haidt). The first expands one’s horizon by looking at the vast array of alternative views of the world, from Japan to India and from enlightenment France to the Middle East. It feels all-encompassing and quite a tour de force, and it leaves you with a strong sense of the deep connections between philosophy and culture.

The second might best be approached via the chapter on ‘WEIRD morality’ which can shake your complacent, culturally conditioned approach to politics and religion.  Haidt pulls you up short – if your culture is typically ‘Western, educated, industrialised, rich and democratic’ – with the observation that there are more foundations for basing your morality than the common liberal one of avoiding harm to others but otherwise just getting on with your life.  In other cultures you might balance your ‘ethic of autonomy’ with an ‘ethic of community’ or even ‘an ethic of divinity’.

Or you could re-examine the basis of your morality altogether by considering a range of foundational intuitive factors, ranging from the desire to avoid harm and to seek fairness (however defined); through the instinct to resist oppression;  to the goals of respect for loyalty, authority and, finally, ‘sanctity’ (or avoiding degrading ourselves or others).  Haidt examines all these foundations in fascinating detail before looking at their implications for politics and religion.

One of the earliest discussions at Wychwood Circle was based on Finding Happiness – Monastic Steps for a Fulfilling Life, by Abbot Christopher Jamison.  Those monastic steps, it turned out, could be applied to any of us – that is, as long as we are as interested as the Abbot in what might be called an integrated ‘interior life’.  If we are, then we might find that we need to look at our ‘spiritual hygiene’ in the same way as, with our basic familiarity with modern medicine, we have been brought up to observe physical hygiene.

Jamison’s starting point is that the phrase “Blessed are the pure in heart” could be construed in the modern mind as [my form of words] ‘blessed are those who seek interior, and not just, exterior freedom’:  his argument is that happiness or fulfilment depend on choosing that interior freedom, that freedom of spirit. His belief is that the urge for that monastic wisdom is present in every ‘spiritually healthy adult’ in the form of ‘the contemplative urge, the desire to step back, be still and look inwards, the desire to find sanctuary’.

The outline of the book, as some of us will recall, is the Eight Thoughts of that early ‘desert father’ John Cassian (b 360 AD), soon to be taken up by St Benedict and others.  The purpose of examining these Thoughts – beginning with ‘Acedia’, or spiritual laziness or apathy, and going on to the better-known ‘deadly sins’ of gluttony, vanity, lust etc – is to increase self-awareness.  Cassian would urge us, in this way, to ‘freely choose purity of heart at every moment of the day’, says Jamison.

The way to do that as a monk may be to pray, which includes contemplation and reflective reading;  some in 2020 may be more likely to turn to meditation and some specifically to mindfulness meditation.  One meditation textbook describes how our unconscious conditioning ‘can be purified by the illuminating power of mindfulness’. A definition of mindfulness might be the practice of cultivating ‘spacious, appreciative awareness’ and in 2016 we were fortunate to have the guru of British mindfulness, Mark Williams, to speak to a packed village hall, followed in 2019 by author and trainer Tim Stead.  Mindfulness meditation helps us to get to know our minds, beginning by noticing our thoughts and sensations coming and going and deciding whether we want them to define us, choosing to respond rather than react, and so on.  I imagine Cassian would have been happy with that.

Not doing harm to others?

Our attitudes are shaped by our thoughts: as the Buddha said, ‘what we incline the mind towards is what the mind becomes’.  Jamison stresses that self-awareness is not just about a private world of introspection, but ‘attentiveness to my way of relating to people and things’ and this brings us again to Jonathan Haidt’s eye-opening and seminal book on moral psychology and its interface with religion and politics.  Our interaction with the world includes our attitudes as well as our actions, says Jamison, an approach which denies the belief (which Haidt emphatically challenges) that ‘something is good so long as it does no harm to others’.

My inner world can do harm as well as good, to me as well as to others.  The examined life (to misquote Socrates) might indeed make life far more worth living.  And then we might better understand others too.

Posted by Wychwood Circle at 05:24 No comments:

News from the Planning Meeting

Thank you to all those who took the trouble to join us for this.

It was agreed that the current format of meeting monthly, usually on second Sundays at 7.00 pm in Milton library or village hall, was a good pattern;  and we discussed the sorts of topics and speakers that we would appreciate.

I'll apply myself to devising a programme and will contact members (and post details here) as it takes shape.

Next month is of course Easter, and so our next meeting (pestilence permitting) will be on May 10th -- book the date!
Posted by PJohnP at 13:22 No comments:

.. to David Soward, who has been convening the Circle for several years now.  David stepped back at the end of 2019, and John Partington has agreed to take on the role.

The Circle consists, of course, of its attenders – John is only the co-ordinator.  Be sure to come to our next meeting (7.00 pm on Sunday 8 March in Milton Village Hall) to share opinions and ideas about our programme in 2020 and beyond!
Posted by PJohnP at 11:16 No comments: