The Philosophy of Immanuel Kant - introduced by Stephen Pickering

IMMANUEL KANT (1724 -1804) is regarded by many as one of the three great Western philosopher alongside Plato and Aristotle.  By all accounts Kant was a popular lecturer, and he also published extensively establishing an international reputation. At first he taught the well-established philosophy of Leibniz, but became increasingly dissatisfied with it, and in 1781 published his master work, the Critique of Pure Reason. A second edition was published in 1787, followed by the Critique of Practical Reason (moral philosophy) and the Critique of Judgement (aesthetics) in 1788 and 1790 respectively.

What does Kant’s Critical Philosophy aim to do?
The aims of Kant’s critical philosophy can best be understand from their historical context, which is the Enlightenment. Kant invented the slogan ‘Dare to know!’ to describe the Enlightenment. Enlightenment therefore meant rejecting dogmatic claims to knowledge, in particular religious dogma, and dogmatic or speculative philosophy. But what should replace dogma? There were two contenders: rationalism and empiricism.

Rationalism and empiricism are competing and mutually exclusive theories of knowledge. Rationalists believe that our understanding of the world should be based on reason alone; empiricists, that it should be based on observation and experience. The rationalist school (Descartes, Spinoza and Leibniz) and empiricist school (Locke, Berkeley and Hume) had been in competition over a hundred years. Kant’s greatest claim to fame was to unite them – thus ending the war among the philosophers – while at the same time leaving room for religious belief as well, thus also ending the war between science and religion. This unification needed a revolution in philosophical thinking.

What can we know?
Kant starts his revolution quietly enough by first distinguishing between knowledge derived from experience, in particular scientific or empirical knowledge, from other knowledge. That other knowledge mainly comprises Euclid’s geometry and Aristotle’s syllogistic logic. That knowledge is over two thousand years old and has never needed revision. It is the surest knowledge we have. Moreover, it is completely independent of the way the world is. It is knowledge we can claim to have before we begin a scientific investigation. For that reason Kant calls it  a priori knowledge, to distinguish it from experiential or scientific knowledge, which he called  a posteriori knowledge. And it is about a posteriori knowledge that Kant holds a remarkable and revolutionary view.

Kant’s ‘Copernican Revolution’
Kant’s ‘Copernican Revolution’ was to see space and time not as features of the external physical world, as Newton imagined, but rather they are an internal feature of our faculty of perception If space and time are mental entities, then we do not experience reality directly. Indeed, reality does not exist in space or time at all.  The world of objects that we experience through the senses is a world of appearances. However, these appearances exhibit regularities that can be studied and described by the laws of physics. In that sense, the world of appearances is empirically real. And because, unlike dreams, there is regularity and order in the world of appearance, we can be sure that there is some underlying deeper level of reality which is causing the appearances. Kant calls the underlying reality the noumenal world (in contrast to the phenomenal world of experience). All we can say about the noumenal world is that it is not spatio-temporal. And because reason and the categories exist for understanding the phenomenal world, their use to speculate about the noumenal world is questionable and probably invalid. We cannot therefore know anything about the noumenal reality that underlies appearances. Rational arguments aimed at proving (or disproving) the existence of God  therefore fail because reason is being used outside its domain of validity. We may choose to believe such arguments as a matter of faith, but we are constitutionally incapable of knowing the truth of such matters. But that also means that religious beliefs are beyond the remit of scientific investigation, and thus science and religion can coexist without contradiction.


Kant made a great impression on his contemporaries, but he stressed that his work only laid the foundations for a philosophical system because he had merely shown the limits of reason, and that it would be for others to complete it. Philosophers took up the challenge with enthusiasm. Unfortunately they all went their own divergent ways leading not to one unified system but to a diversity of systems that persists to this day. But it is for just this reason that he remains an pervasive influence in modern western philosophy.

Join us if you can at Wychwood Library on Sunday April 2nd at 7.00pm for Stephen's introduction and discussion of Kant's philosophy.  No prior knowledge required - but you might be glad to have read this post before you come!
Posted by Wychwood Circle at 09:50 No comments:

THE PHILOSOPHY OF IMMANUEL KANT 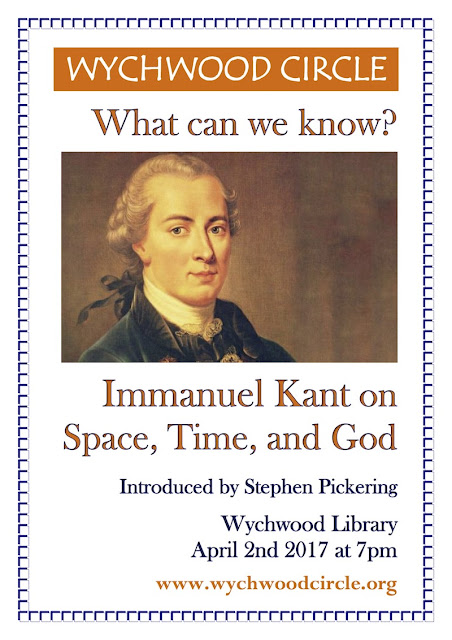 Posted by Wychwood Circle at 02:38 No comments: