'DON'T LET THESE MUSLIMS COME OVER HERE AND ISLAMISE OUR SOCIETY...'


Julian Bond, former director of the Christian Muslim Forum (more detail below), has kindly provided the following taster of his theme on June 4th at Wychwood Library, to which as usual all are welcome:

There is a lot of negativity towards Muslims in some parts of society, including amongst Christians. Having come to be involved in inter-faith, and especially Christian-Muslim interaction, through openness and actual encounter, it was only later that I started to look for Biblical or Gospel reasons for positive engagement with Muslims.  One of the key texts is 'Love your neighbour', or as I prefer to say in particular contexts, 'Love your Muslim neighbour'. Continued reflection on this, coupled with my writing project 'Jumbled up in Jerusalem', a contemporary retelling of the Gospel story, led me to begin thinking about how Muslims might be incorporated into the story and teaching of Jesus. A few examples are shown below:

"If anyone causes one of these beloved ones - who believe in me (this includes Muslims) - to trip up, they'll wish they'd been thrown into the sea with a heavy weight hung around their neck."

"You have heard it said, 'Don't let these Muslims come over here and Islamise our society'. I say - don't be so bloody arrogant and hostile; society is for everyone and if you hate people you might as well kill each other!"

"You have heard it said, 'Love your neighbour, and to hell with all these bloody immigrants and refugees ...' But I say to you, 'Stop reading the tabloids.  And yes, loving your neighbour would be a good start, but love your enemies too, love foreigners, strangers, Muslims, LGBT folk, atheists, secularists, Jehovah's Witnesses, Mormons, tax men (and women) and DWP employees. Bless them!"

"A man and a woman go into the Temple to pray. One of them is a Methodist preacher and prays like this, booming and echoing round the building: 'God, I thank you that you've chosen me and I am one of your people, that I am counter-cultural, I don't drink, don't gamble, don't invest in unethical companies, fast during Lent and give to Christian charities.' But the other one, a Muslim, prays like this: 'O Allah, in your love and mercy have mercy on me and all my failings; keep me on the straight path.'"


Former Director of the Christian Muslim Forum Julian Bond is currently working as Connexional Grants Team Leader and was previously seconded to the Archbishop of Canterbury's Initiative in Christian-Muslim Relations for two years from the Inland Revenue. He was one of the originators of the Christian Muslim Forum's leaders programme which has been encouraging influential Christians and Muslims to engage with each other at a local level.

Julian Bond has engaged with the Muslim community around the country while also encouraging Christians to meet with Muslims both through the Christian Muslim Forum and as a member of the Methodist Church - member of The Square, Dunstable and previously District Inter Faith Advisor for Bedfordshire, Essex and Herts. His passion is for committed friendship and collaboration between Christians and Muslims.
He is a Theology graduate from the University of Aberystwyth and is keen to encourage wider dialogue with, and 'translate' religious ideas for, the non-religious. He is currently writing a short book on 'Jesus our Role Model'.
Posted by Wychwood Circle at 09:24 2 comments:

WHAT JESUS SAYS ABOUT MUSLIMS 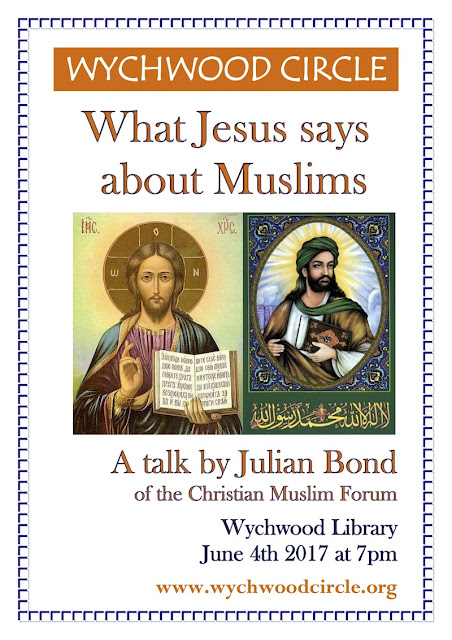