We have covered many topics at Wychwood Circle, from atheism to antropology, from compassion to cosmology, and from poetry to politics, but it wouldn’t do for an outward-looking group like ours, open to discussing almost anything with anybody, to neglect one of the biggest issues of our time.  With the promising Paris talks on climate change in December and almost monthly reports of record temperatures or unprecedented weather conditions, it was high time to turn to the big one: what is our responsibility to our environment, both as individuals and as citizens? In other words, just what are the Ethics of Climate Change? 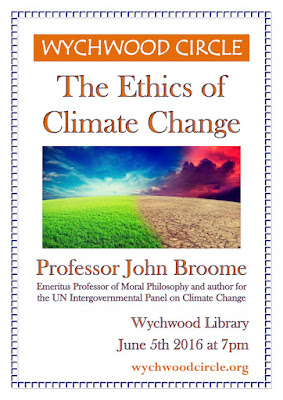 We are fortunate indeed to have Professor John Broome join us on June 5th.  Until last year he was White’s Professor of Moral Philosophy at Oxford and he wrote a fascinating if disturbing article in the faculty magazine (Oxford Philosophy 2014 - scroll to pp 8-11).  John Broome spent several years as Lead Author for the Intergovernmental Panel on Climate Change (IPCC) and in this piece – entitled CLIMATE CHANGE IS A MORAL PROBLEM – he recounts in detail the long process of producing an internationally acceptable Assessment Report for the UN.  It soon becomes clear that climate change is a political and diplomatic problem too.
You cannot of course avoid the economics of climate change – what a boon for the PPE-ers of this world! – and John Broome knows all about that too.  In his very readable 2012 book,  CLIMATE MATTERS: ETHICS IN A WARMING WORLD,  there is a chapter on Economics (externalities, inefficiency, waste) as well as one on Justice and Fairness and – beware of being challenged about your lifestyle and not just your politics! – one on Private Morality.  The Amazon blurb reads as follows:

Esteemed philosopher John Broome avoids the familiar ideological stances on climate change policy and examines the issue through an invigorating new lens. As he considers the moral dimensions of climate change, he reasons clearly through what universal standards of goodness and justice require of us, both as citizens and as governments. His conclusions-some as demanding as they are logical-will challenge and enlighten. Eco-conscious readers may be surprised to hear they have a duty to offset all their carbon emissions, while policy makers will grapple with Broome's analysis of what if anything is owed to future generations. From the science of greenhouse gases to the intricate logic of cap and trade, Broome reveals how the principles that underlie everyday decision making also provide simple and effective ideas for confronting climate change. Climate Matters is an essential contribution to one of the paramount issues of our time.

Most of our events at Wychwood Circle this season have had at least some reference to faith – even on Mindfulness someone wondered if Jesus was ‘mindful’ – and it would be hard to uncouple belief in our environment from a spiritual outlook, if not a religious one.  However, it is worth saying that we have invited Professor Broome with no idea whatsoever of his faith position, if any.  Climate matters: John Broome wrote the book.  He’s an Oxford philosopher, a world authority, and was good enough to accept our invitation.  We look forward to being stimulated by his talk.
Posted by Wychwood Circle at 04:47 No comments:

ANGELA TILBY ON THE 'DEADLY TWIN OF AVARICE'

The article below was written by Angela Tilby in her regular column in the Church Times on April 22nd 2016.  It is reproduced here by kind permission of the Church Times (www.churchtimes.co.uk).

DEADLY sins go in and out of fashion, as recent news events demonstrate. Gluttony is serious — see the obesity epidemic. Lust is apparently no longer much of a problem — the Culture Secretary’s liaison with a dominatrix produced sniggers rather than censure.
Avarice, however, is another matter. The Panama Papers, the agonised revelations of the Prime Minister’s tax arrangements, the spotlight on Tony Blair’s carefully accumulated millions — all have sparked a sense of outrage. The line has been eroded between tax avoidance, once regarded as no more than careful money-management, and the crime of tax evasion. The secretive rich are simply loathed and hated.
One of the early Christian commentators on avarice, the fourth-century hermit Evagrius, was not sure whether avarice was, like lust and gluttony, a sin of the appetites, or more a sin of misdirected enthusiasm. On the whole, he treats it as sin of the appetites, and links it to anxiety and personal insecurity.
The avaricious person is not necessarily a wicked hoarder whose sole aim is to grind the face of the poor, but, rather, a brooding control freak, anxious about the future and obsessed with the issue whether there will be “enough” to deal with what might happen, and, in particular, with the indignities of old age.
Christians are meant to be free of financial anxiety, living in the moment, and not planning for the future, which is in God’s hands. The avarice that is so condemned in today’s society is often closer to the supposed virtues of thrift and prudence than we might imagine.
At the Reformation, a different theology of wealth emerged. While love of money for its own sake was still regarded as evil, Christians were urged to see wealth as creative rather than destructive. Improving one’s talents was part of Christian stewardship, and that could include the pursuit of profits for the sake of the Kingdom of God.
John Wesley urged his followers to earn all they could, save all they could, and give away all they could. Thus money was kept in circulation for the benefit of all. Capitalism and its fruits have indeed lifted millions out of poverty, while the philanthropic work of people such as Bill Gates have shown how the rich can make a real difference.
The depressing thing today is not so much that the rich are rich, as that so many of them seem so selfish: slaves not only to their own appetites, but to narcissistic vanity and pride — sins more deadly than avarice. And the rest of us are not let off the hook. Envy is the twin of avarice, and just as deadly.

Posted by Wychwood Circle at 09:24 No comments: