THE CULT OF CONSUMERISM - MORALLY NEUTRAL OR HIGHLY DESTRUCTIVE?

Mark Clavier thinks the insights of sociology have been largely untapped in theological discussions compared to the influence of modern philosophy and the life sciences.  In particular, the popular notion of ‘postmodernism’ is often just consumerism ‘dressed up in posh, philosophical clothes’.  His reading in sociological discussions of consumerism has led him to wonder whether consumer culture, partly because it makes the same claims on identity, is 'best understood as a religion – a highly destructive one, too – that needs to be better understood and challenged.’

In a recent book he says consumerism is not morally neutral, as some have claimed, but is more like a global movement that has many of the same characteristics as the great religions.  Christianity and Islam offer the nearest historical parallels, both international movements that ‘either eclipse or transform local cultures’.

One of the ways that religions transcend local culture is by connecting with people at the important moments and stages of their lives and situating those events in a larger narrative. Almost all religions have rites of passage and other rituals meant to provide meaning …

Drawing comparisons with the ‘sacraments’ in Christianity (baptism, confirmation, Eucharist, marriage, etc) he devotes the first part of his book to demonstrating how consumerism is a global religion, by mapping out ‘a consumer’s life according to a sacramental grid’.  Thus chapter 2 is entitled, Initiation into consumerism, and chapter 3, The consumer rites of adulthood.

As well as criticising the churches for conforming to consumer culture, Clavier goes on to draw attention to just how much damage consumerism is causing to 'culture, societies and the planet'.  It’s not just environmental degradation, of which we all become ever more conscious, but also the fact that we can only enjoy the fruits of consumerism because the vast majority of the world’s population cannot.

Ultimately the enjoyment in wealthy nations of maximised choice, self-actualisation and ready access to goods and services is based on profound inequality. … [W]e are only free to be who we want to be because almost everybody else is not.


Anyone is welcome to join the discussion at Wychwood Library on Sunday, May 7th at 7pm.  A retiring collection will be taken to cover costs.

HAVE WE ALL - EVEN THE CHURCH - BEEN INFECTED BY CONSUMER CULTURE? 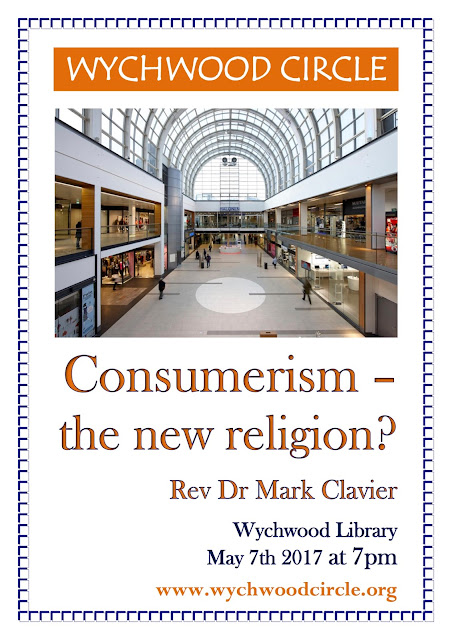 Posted by Wychwood Circle at 09:43 No comments: