WHAT IS BEAUTIFUL, TOUCHING AND WISE

I enjoyed half-an-hour with a cappucino and Alain de Botton in Blackwell’s the other day. It’s great: you can read a chapter and then put him back on the shelf.  The book in question, which demanded to be dipped into, was Religion for Atheists, grist to the mill when you’re into exploring the boundaries of theology.  The author graciously admits that religions can be ‘sporadically useful, interesting and consoling’ and then goes on to write a whole book about how to pick out what they have to offer. Anyone who is serious about life (someone on this page recently described ‘being spiritual’ as precisely that) might want to do the same, positively but less patronisingly.

De Botton’s starting point is as good as any and would have chimed in with Reverend Andrew Thayer’s presentation to Wychwood Circle earlier this month (“Thank God I’m an atheist”). It is neatly summed up in this  sentence:

It is when we stop believing that religions have been handed down from above or else that they are entirely daft that matters become more interesting.

It’s a bit long to go on the bottom of our Wychwood Circle posters but it would make a good advert for our discussions.  He ends his first chapter with the words of our heading – he says he wants to 'rescue what is beautiful, touching and wise from what no longer seems true'.

Had we managed to organise a head-to-head between Alain and Andrew, I suspect the latter would have wanted to know just what it is that “no longer seems true” to Alain and then mostly agreed with him.  Andrew gave us a brief but lucid, and welcome, exposition of a twenty-first-century - as contrasted with a first-century - view of three aspects of his faith, under the headings Cosmology, Biology, and Christology. There are plenty of present-day Christians who would not agree with that contemporary view and they have a lot to answer for in terms of making Christianity both incomprehensible and irrelevant to people’s twenty-first century lives.  But in the spirit of de Botton and ‘postmodern’ theologians we do better to look for what is meaningful rather than what isn’t.

Andrew Thayer showed us how you can leave behind the first century view of the universe as ‘heaven above and hell below’, for instance, and yet retain that first-century ‘sense of infinitude’; that a present-day view of 'salvation' would need to ask, salvation how and from what?, but that a Christian can still see Jesus Christ having a key role in revealing that elusive mystery to us;  that a one-line description of what Christ was about (such as a favourite Bible quotation or a phrase from the Book of Common Prayer) will be as inadequate as describing Martin Luther King by the single phrase for which he is now famous.

Andrew’s most telling analogy – surprisingly for us, but appropriately for a Texan – was probably the Chisholm Trail in the States.  This is a two-mile wide cattle trail from Texas to Chicago, one of several visible from space and dating from the days when cattle fetched 10 times as much in Chicago as it did in Texas.  He compared this vast trail to the Christian tradition: it’s very long and it’s very wide and you’ll never use it all up.  Any atheistic critique of religion cannot therefore afford to be either narrow or binary.  And as John Macquarrie (former Professor of Divinity at Oxford University) wrote in his Principles of Christian Theology, in an understatement passing almost as a throwaway remark: 'The idea of God has undergone many changes in the course of its history.' *

Macquarrie, incidentally, points out in the same chapter:  ‘the word atheism must also be understood in relation to what it denies. Presumably most modern men deny the the gods of mythology, and so from the point of view of a believer in these gods, they are atheists.’ An atheist friend of mine recently related that there have been around 2600 ‘noted and recognised gods’ over the years and that this makes us all atheists regarding the 2599 even if we are monotheists.  The point is that you cannot be an atheist without describing what it is you don’t believe in and therein lies the weakness and sterility of the argy-bargy of the ‘new atheist’ debates: we probably agree about a good 99% of what we don’t believe in.  Better to begin with De Botton and at least explore, as he entitles his first chapter, ‘Wisdom without doctrine’, even if you don't go any further.

On October 6th we meet again at Wychwood Library to explore the very positive theme of “What guides our choices”.  Ian Cave has kindly offered to lead the discussion and there is a short piece entitled Blindness in Springtime which will act as a springboard for people’s ideas, beginning: “If I had my life over again…” Plenty of scope for wisdom, with or without doctrine, there.

* Macquarrie, in his monumental modern study of the Principles of Christian Theology (SCM Press, 1966, 1977) devoted the first third of the book to Philosophical Theology, where amongst much else besides he traces these changes from the mythological level through traditional theism to what he calls ‘the phase of existential-ontological theism’.  Macquarrie’s systematic ‘philosophical theology’ is worth looking up, particularly if you have any sympathy with existentialism – as he does, for instance comparing Sartre’s conclusions with the religious one.  In the light of our Wychwood Circle discussions, it is interesting to find a Canon of Christ Church, Oxford stating (at the start of chapter 5 on Being and God): ‘It has already been made abundantly clear that faith is not primarily assent to propositions, but an existential attitude of acceptance and commitment.’ From this point of view it probably reduced his appeal to our very mixed audience that Andrew Thayer began his talk with an elaborate reference to the Church’s Nicene Creed  – but then he is an Anglican priest as well as a theologian and it was arguably a suitable if provocative point of departure, given our topic.


An exploration of the boundaries between theism and atheism

Do join us. Andy is in the UK to work on a PhD on ecclesiology and Derrida at Mansfield College, Oxford. While he does so, we are lucky to have him as Associate Priest in the CHASE benefice (Chadlington, Ascott, Spelsbury, etc).  This talk arose out of a broader discussion of the subject matter of his thesis as well as the sort of issues which were being discussed at Wychwood Circle.

Wychwood Circle is all about making sense of faith, breaking down barriers, exploring boundaries imposed by our education and culture, discussing spirituality, ethics and how we choose to live.  Six months on from our guest, Brian Mountford, who in March 2013 talked about the ideas developed in his book, Christian Atheist, this is a welcome return to the exploration of this particular boundary or set of boundaries.  We are an open forum, always glad to welcome anyone who cares to look in, pass on, or stay and contribute.
Posted by Wychwood Circle at 12:22 No comments: 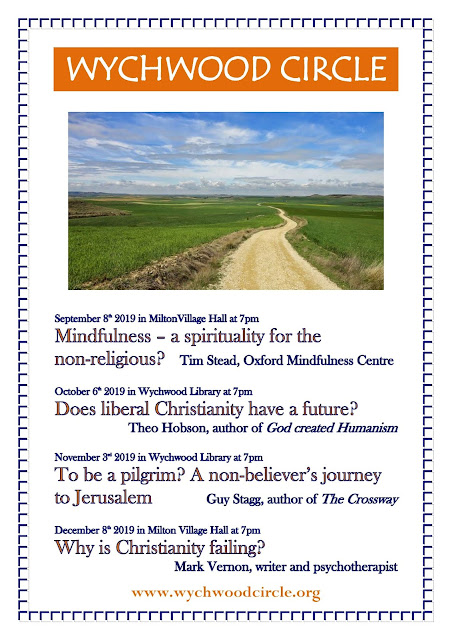 Wychwood Circle
An open forum in West Oxfordshire, where we explore what we think matters in life and the way we choose to live. Our discussions - prompted either by a book or article or by a speaker - cover philosophy, theology, ethics, pyschology, anthropology and more besides. We usually meet on the second Sunday evening of the month at Wychwood Library in the High Street of Milton under Wychwood, OX7 6LD. The Circle is expressly an open and diverse one and all are welcome, from near and far. The Wychwoods lie between Stow-on-the-Wold, Chipping Norton, and Burford, in the north-eastern Cotswolds. Our name was originally inspired by the Great Tew Circle of the 1630s, a group of clerics and literary figures who met at the manor of Great Tew, just over the A44 from us. We welcome comments, ideas and contributions to this site. There are more frequent posts at facebook.com/wychwoodcircle where you can also contribute by sharing ideas, articles or events.