WHY DO YOU STAND LOOKING UPWARD TOWARDS HEAVEN?

From disability and domestic violence to retirement and vocation

Whatever the topic that Dr Samuel Wells alights on, you can be sure that, having stated the problem (if that is what it is), he will turn to a carefully chosen Bible story to find a framework within which to discuss it.  That will irritate some and reassure others.  A positive response is to sit back and let him choose his ethical framework - probably as good as any - and then join in with his examination of the themes which arise.  After all Sam Wells is too intelligent and worldly to resort to Old Testament commandments or even New Testament injunctions.  These are stories as illustrations and, whatever one makes of the person of Jesus Christ, a thoughtful twenty-first century application of them to very contemporary problems can be a useful springboard to a moral discussion - as we do at Wychwood Circle.

A soap opera ... with everything at stake

In his chapter on Disability, Wells turns to the story of a blind man whom Jesus heals - but he calls it a 'seven-scene drama of healing, controversy and reversal', and seen in this light it is not too far-fetched to then compare it to 'a soap opera; except with life, the universe and everything at stake'.  There are important, everyday themes about how the blind man is seen by his community as a nuisance, about prejudice and stereotyping, about personal responsibility versus structural injustice, about empowerment.  Then there is the deeper metaphor of what it is 'to see' and to know and the whole discussion - as we have touched on several times in recent months - as to what reality is and how to discover it.  As the author says in his three-part analysis:

[And] the third level is a journey that makes sense of why many disabled people see their lives as more fulfilling than a conventional life.  It's about empowerment and vocation, about subversion and wisdom, about what only the blind can see and only the intellectually impaired can know.

Being human in retirement

Sam Wells comes at Retirement from his own experience of management studies and the Four Stages of Work. In essence he wants to empathise with those who don't know when it's time to go - or if they do know they are reluctant to make the move:


'If I don't come to work I don't know who I am - all I have left is the unresolved issues in my home, the mirror of my own mortality, and rather less money coming in to make either more palatable.'

He also makes the point that the whole concept of retirement is still quite a new phenomenon in our human history.  No wonder it is something that can be an awkward transition, if not a source of serious depression.  How nice, you might think, to find that his biblical illustration this time is 'the story and doctrine of Jesus' ascension'!  The starting point is: 'Jesus stopped because he'd finished'.  Or had he? Well, for the Christian, according to Wells:

Entering fully into the more mundane aspects of life

For Christians and non-Christians alike, though, there are some useful and applicable points:  you, as a human, 'don't have to get it all done, you don't have to leave it all tidy, you don't have to ensure it for ever remains just the way it is now.'  After all, the incarnation is about (amongst other things) being more fully human and therefore 'entering fully into the more mundane aspects of human life'.  And this, he says, is what retirement is about:

You haven't got a mask to put on each day to protect yourself from your fragile reflection in the mirror.  But you are as fully alive as you ever were, as fully human as a young graduate starting out on a career.

So it could mean a whole new beginning; it must be about the future, not about looking back. In fact there is a Japanese tradition that sees a whole new cycle of life beginning at 61! The question, asked by the two men in white robes when Jesus could no longer be seen, is a good one and a challenge, sooner or later, for all of us:  'Why do you stand looking upward towards heaven?'  There are new discoveries to be made, the world is full of needs to be met, and there may yet be possibilities of transformation, for us and for the communities around us.

To join us on Sunday February 11th as we discuss Part 2, 'Being Human', of Sam Wells' book, please email david.soward@gmail.com for details.
Posted by Wychwood Circle at 03:33 No comments:

PART TWO: 'BEING HUMAN' - a discussion based on the 9 short chapters of this second of three parts in Sam Wells' book 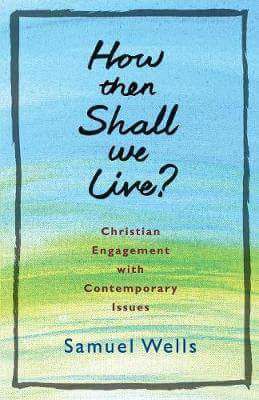 Our February event takes the form of an informal discussion on the themes aired in this book by Sam Wells, Vicar of St Martin in the Fields in London, academic and theologian.  His approach is that of an experienced Christian pastor and preacher, but our own discussions can range far and wide.

Attendance does require a commitment to read the relevant chapters.  Please email david.soward@gmail.com to be included.

Posted by Wychwood Circle at 09:17 No comments:

A not very nice word usefully describes the verbal malaise which we are living through.  Evan Davis of BBC2's Newsnight and formerly of the Radio 4 Today programme wrote a book last year called 'POST-TRUTH - Why We Have Reached Peak Bullshit and What We Can Do About It'.

One possible source for this infelicitous phrase is a former speechwriter for both Hillary Clinton and Barack Obama, who in turn may have got it - in this context - from the American philosopher Harry G Frankfurter in the 1980s, who later wrote 'On Bullshit' (2005). The speechwriter, John Lovett, describes it as 'one of the greatest threats we face' and one is inclined to agree. It may have been common for some years but in the UK it certainly reached its peak in the 2016 referendum lies, counter-lies, widely disseminated misinformation and (consequent?) distrust of experts. Now anyone from presidents to prime ministers is routinely expected to mouth at best half-truths and at worst blatant verifiable untruths.

Economical with the truth?

The 'common but simplistic' definition of bullshit, as Davis has it, is 'to talk nonsense to someone, typically in an attempt to deceive them'. As someone who, having started out as an academic economist, has now for several years interviewed politicians and other public figures as part of his job as a journalist, Davis is well-placed to go on, as he does in his book, to examine the concept further and in a number of contexts. Examples include the defense in the Soham murder trial in 2002, claims by scientists about CFC gases and the ozone layer, statements made by paid public figures to advertise products, the Spycatcher case (1986) where Sir Robert Armstrong was 'economical with the truth', and, much more recently, predictions of the effect of Brexit on the UK economy.

A key point Davis makes early on is that, while there are undoubtedly facts - and falsehoods - which may or may not appear straightforward, we do in fact very often have to make a judgement in deciding what is a fact and what to believe. We may weigh up the probabilities, the evidence, the source or speaker, their motivation, the scope for interpretation, and so on, but things are rarely as straightforward as banal facts, such as 'the sun is shining'.

'The essence of bullshit', according to Frankfurter, 'is not that it is false but that it is phony.'  If he got here in the 20th century, says Davis, he was ahead of his time in 'capturing some of the silliness of twenty-first century public discourse'. Davis' book is illuminating for the light it sheds on a broad variety of 'non-factual (or post-factual or afactual) discourse': he identifies a number of different forms in which we have got used to statements - and sometimes actions - which are factually misleading, including:
And then the numerous examples of plausible statement where facts are actually irrelevant:

The more one considers these multiplying examples the more it is tempting to think that nothing has changed.  People have always exaggerated, obfuscated, twisted the truth - from conversations in the pub to advertisers and politicians. But has it in fact got worse, and does it matter?  And what about that notorious phrase used by Michael Gove in the EU Referendum in the UK: 'people have had enough of experts'?

Truth and trust - and do they matter?

We are lucky in the Wychwoods to have ex-Marine and Oxford philosopher Tom Simpson on hand on Sunday 14th January to help us think through this maze or malaise, and consider in depth the issue on which he has specialised in his research: that of Trust.  Join us at Wychwood Library at 7pm.  Free entry - retiring collection to cover expenses.
Posted by Wychwood Circle at 05:26 No comments:

'WORDS BECOME FLESH; SO USE THEM WITH CARE'

ARE WORDS BECOMING AS DISPOSABLE AS ANYTHING ELSE?

Mark Oakley (who we were lucky once to entertain at Wychwood Circle) wrote an end-of-year piece about what he looks back on after nearly 25 years of ministry.  It included, amongst much else that he modestly said he owed to his many teachers and colleagues, the following wise words about words and our contemporary culture :


This is not an easy time for words. We are living at a time when we are spending money we don't have on things we don't want in order to impress people we don't like.  Consumerism makes words seductive rather than truthful, as they lure us towards our wallets. Technology, for all its brilliance, now also give us too many words; we trip over them as they come at us from every direction, and the danger is that our care for words decreases as the words proliferate. We make them as disposable as anything else.

Then there are our political leaders who, in many parts of the word, now campaign in graffiti, and govern in tweets.  The way that words are currently being used by some influential communicators - with continual talk of "individuals" rather than "people"; or "losers", "swarms", and "sad" failures - all makes a world where we see ourselves as competitors not citizens, consumers not communities.  It leads to a world in which, as has been observed, if you are not at the table you are probably on the menu.

WORDS AS CARRIERS OF TRUTH AND MEANING

In the end, nations are largely the stories that they feed themselves: if fed lies, they will, in time, suffer the consequences.  That is the other Christmas truth that I want to live out better in 2018: words become flesh; so use them with care. If words are not respected as carriers of truth and meaning, this quickly leads to human beings' not being respected, either.

The same ears as listen to politicians, salespeople, and news commentators are listening to the person who is trying to point to the rumour of God, to the transcendent sense that, ultimately, reality is trustworthy. Sadly, the language with which we do this as a Church can reflect the superficial or clinical vocabularies of the hectic newsroom or the droning boardroom, the Church at the moment occasionally sounding as if it simply offers us the choice - in Brian McLaren's words - between "ignorance on fire or intelligence on ice".

The full article from which these paragraphs are taken can be found in the Church Times dated 21st December 2017.

Join us at Wychwood Library on January 14th as philosopher Dr Tom Simpson from the Blavatnik School of Government at Oxford University addresses questions about truth and trust.
Posted by Wychwood Circle at 12:43 No comments: