HUMANISM AND OTHER RELIGIONS

There was a query recently on social media as to whether someone who identified as an ‘atheist Quaker’ was any different from what is commonly called a ‘humanist’.  To which one response was to suggest that, to coin a phrase, ‘All Quakers are humanists but not all humanists are Quakers’.  It is up to self-identifying Quakers and humanists to speak for themselves but a further post which stated that ‘Humanism is an alternative to a god’ certainly needs challenging, even if the supposedly reputable source was the website humanism.org.uk.

The definition of humanism is an intriguing one.  Secular humanists have tended to appropriate it to themselves, viz the website quoted.  People like Polly Toynbee are often referred to as humanists and the implication is that it is more than her humaneness or her belief in humanity which distinguish her.  Yet if we look at Christian humanism (itself a worthy tradition), humanity, humane-ness, and being (fully) human are arguably precisely what Christianity is about.  As an excitable theologian might cry out, What else is ‘incarnation’ about, for Christ’s sake?!

Humanism – alternative or essence?
What is meant when referring to the admirable Polly Toynbee is that she is a secular humanist. So one response to humanism.org.uk’s claim is that humanism may well be an alternative to ‘a god’ – after all there are so many gods to choose from in contemporary culture and politics, take your pick... But when it comes to any sophisticated look at theology, certainly of the Christian variety, humanism is on the contrary the essence of God.

Someone once said that there are so many gods out there (even taking only the religious interpretations) that we are all atheists in the sense that we reject one or probably most of them.  That was perhaps a rather facile point to make.  But no-one can accuse British philosopher John Gray of being facile or glib. And in his most recent book Seven Types of Atheism, (published by Penguin), he analyses just what atheism has meant over the years and how different thinkers (including secular humanists) have understood their view of God (or ‘a god’) and how it has affected their approach to life and their view of the world.  For obvious reasons it is a book which we are considering taking as our launchpad for once-a-term discussions on Sunday nights at Wychwood Circle.

Man, his dignity and his life
In an interesting and informative review of the book*, Nick Spencer, Director of Research at thinktank Theos and himself the author of Atheists, the Origin of the Species (Bloomsbury 2014), compares John Gray to Pope John Paul II. Gray claims that


'humanity’ does not exist.  All that can actually be observed is the multifarious human animal, with its intractable enemies and divisions.

Spencer recalls the then Pope in a 1993 Encyclical on the value and inviolability of life saying that,

Which is an interesting debating point for any class of ‘humanist’. Spencer suggests that the only thing which separates the language used by the two of them is ‘a sigh of liberation in the first; a sigh of desperation in the second.’ 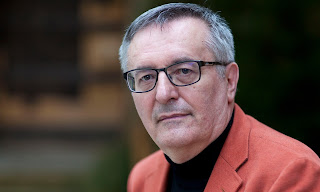 Gray dismisses (don’t we all) the so-called New Atheists as ‘little more than a sideshow – albeit a noisy one’ and they only get a very short opening chapter.  But the other types of atheism include:
Gray himself may be an atheist but he doesn't have much time for some of the others. Or as Nick Spencer puts it:

What seems to infuriate Gray, as it did Nietzsche before him, is the inability of those who dispose of the divine to follow their logic through. Judging by the reaction he sometimes elicits among secular humanists, he clearly touches a nerve.

Cherry picking anthropological and ethical fruit
Gray has form on this, as his previous books have shown. He believes that much of the modern Western thinking which your secular humanist might boast of is really just a newly dressed up ‘bastardised and degenerated version of Christianity, cherry picking the anthropological and ethical fruit while hacking away at its metaphysical roots’ (Spencer).

As we debate whether to embark on Seven Types of Atheism (one reviewer called it ‘depressing’), it may be to its advantage that it will tell us something about Bertrand Russell, William Empson (a ‘misotheist’ or god-hater), the Marquis de Sade, Spinoza and Ayn Rand.  And if Spencer is to be believed (or maybe read more extensively – his own writing looks awfully tempting*), Gray’s prose is ‘never anything less than bracing and witty’.

The atheism of silence
The Guardian newspaper, home of liberalism and humanism and of astute political commentary, not least that of Polly Toynbee, chose two well-known names to review Gray’s book.  Richard Harries (April 15th) was once Bishop of Oxford – so we know where he’s coming from.  Harries picks up on Gray’s belief that most forms of atheism are a form of repressed religion. He is interested in the final chapter of the book, The atheism of silence. This includes a discussion of a ‘godless mysticism’ which seems to parallel the traditionally more mystical emphasis of eastern Christianity (and indeed much western Christian practice too, as Harries points out).  Gray suggests an affinity between the two: “A godless world is as mysterious as one suffused with divinity and the difference between the two may be less than you think.”

‘Hear hear’ to that – as those of us, Quaker, Christian or otherwise, who meditate in Ascott once a month will probably bear witness, and as eye-opening books like The Wilderness Within and many others testify.  Harries’ conclusion is:

This is a highly readable, fascinating book that jerks the debate on religion versus atheism right out of its crusted rut into the light of serious intellectual scrutiny.

Optimists and pessimists
The other review was by literary scholar and cultural theorist, Professor Terry Eagleton (April 11th), with the provocative headline:  'Is every atheist an inverted believer?' Eagleton is tremendously learned and not in the habit of pulling his punches. He places the debate within the context of whether the human race is 'getting nicer and nicer' - drawing comparisons with recent books by Pinker, Matt Ridley and Sam Harris, whom he calls 'rational humanists' - and within the historical context of philosophers and thinkers from Locke to Schopenhauer and the contemporary George Steiner.

Maybe (dare one say), like Brexit turning out to be rather less straightforward or promising than its advocates thought, abandoning religion will also turn out to be a fool's paradise, or even a dead end, only one played out over centuries. Certainly Eagleton is (characteristically) scathing of Gray and specifically of his choice of what Eagleton calls 'a kind of transcendence without content':


Gray condemns secular humanism as the continuation of religion by other means, but his own faith in some vague, inexplicable enigma beyond the material is open to exactly the same charge.

From Gnostics to Bertrand Russell
However, to return to our choice of reading matter at Wychwood Circle, Eagleton's conclusion may be damning with faint praise, or it may be taken as a recommendation. To encourage anyone who likes the idea of a broad survey of those - and there are so many - who have been this way before, he sums Gray's book up as 'an impressively erudite work, ranging from the Gnostics to Joseph Conrad, St Augustine to Bertrand Russell'.  Those of us who are not so erudite but would like to be may welcome both the information and the range of views contained here, as well as the chance to debate our own reactions and opinion.


*There is much more in Nick Spencer’s very full review, which bears reading either as an alternative or an invitation to John Gray’s book, and his own list of books including The Evolution of the West (2016) and the very recent The Political Samaritan could also furnish us at Wychwood Circle with some thought-provoking material.

Our current reading is How Then Shall We Live? by Sam Wells and on Sunday 13th May we reach Part 3, Facing Mortality, which tackles - from a mainstream Christian angle - such thorny issues as Ageing, Dementia, and Assisted Dying. Anyone who has read some of the relevant chapters is welcome to join us at Wychwood Library at 7pm.

Posted by Wychwood Circle at 04:55