A SHARED SENSE OF WONDER

Science and faith: a new dialogue


Rabbi Jonathan Sacks in The Great Partnership (the current theme of discussions at Wychwood Library on the first Sunday of the month) claims boldly that science and religion are not only compatible but ‘more than compatible’:

‘They are the two essential perspectives that allow us to see the universe in its three-dimensional depth. The creative tension between the two is what keeps us sane, grounded in physical reality without losing our spiritual sensibility.’
It’s a moot point whether the age-old science vs religion debate is fascinating or just incredibly dull!  Is the battle irresistible because it goes on and on, apparently unwinnable,  or is it for the same reason just a lot of stale arguments?  Sacks, amongst others, would say it is based on a false dichotomy.  Julian Baggini, in a review of A C Grayling’s book The God Argument, described the whole Dawkins-inspired debate thus:
‘For a while it was at least invigorating.  But the most vocal atheists and the believers who take their bait appear ever more like a long-married couple who prefer the familiarity of their dysfunctional relationship to the emptiness that lies beyond an amicable divorce. They trade the same old niggles and complaints with no hope or expectation of mutual understanding.’
I recently received an email from someone who had attended one of our Wychwood Circle meetings and wished to come off the mailing list again. ‘The problem with non-belief, is, it doesn’t take much exploring,’ he told me.  ‘Non-belief and rationalism are not very nuanced, spiritually at least.  I can only contribute to others’ exploration of their faith by saying (in effect), ‘where is the evidence?’ That is at best tedious and at worst hostile.’  I was provoked by that first sentence – I couldn’t disagree more – and we have since started a fascinating correspondence!
My own position on the science and religion question is the modest but realistic one of saying that I'm not a scientist and I'm not a theologian or philosopher.  It seems difficult therefore to settle down on either side of the agnostic-theist boundary, which in any case I suspect is very blurred.  I am perhaps more interested in watching the others slugging it out, while agreeing with Mark Vernon that, where academics recognise the limitations of their own insights, some 'epistemological modesty neutralises the fight over which discipline is the best arbiter of truth - and all in the interests of thorough and open-minded debate'. 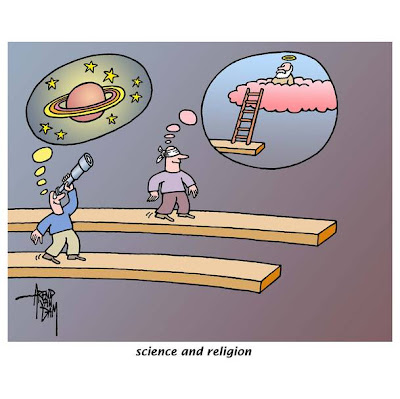 I take comfort in the scientists and philosophers who take that 'modest' line. Stephen Jay Gould famously talked about 'non-overlapping magisteria', which looks like a polite way of saying why don't we all mind our own disciplines.  Thomas Nagel has more recently written a book which was reviewed in a Prospect Magazine blog thus:
'But what if science is fundamentally incapable of explaining our own existence as thinking things? What if it proves impossible to fit human beings neatly into the world of subatomic particles and laws of motion that science describes? In Mind and Cosmos (Oxford University Press), the prominent philosopher Thomas Nagel's latest book, he argues that science alone will never be able to explain a reality that includes human beings.  What is needed is a new way of looking at and explaining reality; one which makes mind and value as fundamental as atoms and evolution.'

THE DIVIDED BRAIN
Where Gould says that religion is needed to discuss Purpose, Jonathan Sacks is interested in the search for Meaning.  Strangely I for one have never been too concerned about Purpose or Meaning, but I am much more taken with Sacks's claim that 'science and religion are to human life what the right and left hemisphere are to the brain'.
In 2010, in a large volume intriguingly entitled The Master and His Emissary - the Divided Brain and the Making of the Western World, Iain McGilchrist produced what the blurb describes as 'a fascinating exploration of the differences between the brain's right and left hemispheres and their effects on society, history and culture'. In it he argues, at great length and based on a vast body of recent brain research, that 'despite its inferior grasp of reality, the left hemisphere is increasingly taking precedence in the modern world, with potentially disastrous consequences.'
Sacks exploits this divide - in far more readable form - and applies it to the history of civilisation and to attempts by religion to dominate science and vice versa.  He argues that it has always been a mistake not to recognise the distinction between right- and left-brain activity and instead 'to apply to one the logic of the other'.  There has been bad religion just as there has been bad science, but the answer to each is to be found in its own terms. The cure for bad religion is good religion, and as he adds, perhaps provocatively, in his chapter on Darwin: 'The way of testing a scientific hypothesis is to do science... The way of testing religion is to do religion...' Describing the whole science vs religion debate as unwinnable, Baggini suggested that it has done 'as much to make the participants feel validated as it has to change their opinions'. So should we give it all up and form our own self-regarding clusters?  Sacks argues not for compartmentalisation but for conversation - which is very much what Wychwood Circle has been all about. It can certainly be trying, particularly when you feel you are out of your depth, but the dialogue is worth having.  Maybe more especially at the academic level.

ENTHUSIASTIC OPTIMISM AND EXCHANGE OF IDEAS
Jeff Forshaw wrote an article a while back about a conference on the banks of Lake Geneva organised by Wilton Park - a forum for international dialogue - in partnership with Cern (see an earlier post on this site dated 21st October 2012). 'The event', he wrote, 'drew together particle physicists, cosmologists, theologians and philosophers in the name of dialogue and mutual understanding.'  He asks: 'In some people's minds, science and religion stand in stark contrast, but is this really the case?  Certainly, years of being a scientist have led me to doubt pretty much everything I thought I knew.'  He goes on to suggest that scientists act with 'what seems to me to be something like faith:  a faith in scientific truths perhaps or in the humbling significance of nature's beauty.  Perhaps "faith" is too strong - enthusiastic optimism might be better ...'
We have toyed with the possibility of reading Mark Vernon, ex-priest and modern agnostic, for our Wychwood Circle discussions.  Vernon recently wrote an article for the Church Times where (maybe with some enthusiastic optimism) he discerned a dialogue in the 'community of scholars' and dared to hope that a 'fruitful phase' is beginning.  He quotes Michael Welker, Professor of Systematic Theology at Heidelberg University: "The most exciting work in the future looks likely to be interdisciplinary".  One example he cites concerns the matter of personal identity.  John Polkinghorne, scientist and theologian, wrote in his Science and Religion in Quest of Truth that an understanding is emerging in modern biology that there is a "continuously developing, almost infinitely complex, 'information-bearing pattern' carried at any one time by the matter that then makes up my body" and he believes this is what, from Aristotle and Aquinas onwards, we have tended to call the human soul.  Vernon concludes:  'The ancient notion looks not unlike the modern one - hence the possibility of fruitful exchange.'
We should give the final word to Einstein, quoted with approval by Sacks: 'Science without religion is lame; religion without science is blind.'

JOIN US as we discuss the third section of The Great Partnership entitled 'Faith and its Challenges' at our open forum at Wychwood Library OX7 6LD:

Posted by Wychwood Circle at 12:43