WHAT MATTERS MOST? IS A CAUSE EVER WORTH DYING FOR?

Our next event, on December 9th, is a talk entitled 'GOD OF THE GULAG - IS ANY CAUSE WORTH DYING FOR?' which will consider martyrdom both in Eastern Europe and in our own wider context - not least the theme of this year's events: What matters most? 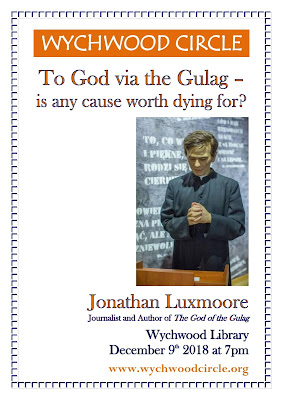 We are delighted to welcome Charlbury resident Jonathan Luxmoore to address this topic, the subject of his much-acclaimed two-volume study published in 2016.

JONATHAN LUXMOORE has been Europe correspondent in Oxford and Warsaw for Catholic News Service (Washington/Rome), Ecumenical News International (Geneva) and The Tablet (London) since 1988, as well as a staff commentator for Polish Radio's First Programme and freelance writer for newspapers and news agencies in Europe and the US.

He was based in Poland full-time from 1988 to 2001, and his coverage of religious affairs during the transition to democracy in Eastern Europe won five Catholic Press Association awards, and the Silver Award from Worldfest Houston for the ABC TV film "A Time to Build" (ABC and PBS TV 1992). More below.

He read Modern History at the University of Oxford (1976-1979) and studied International Relations at the London School of Economics and Political Science (1986-1989), and has been a member of the Royal Institute of International Affairs (Chatham House), the Churches East-West European Relations Network (CEWERN) and the International Editorial Board of the journal Religion, State and Society. He was also a co-founder in 1996-98 of the Polish chapter of Transparency International, the world's largest anti-corruption NGO.


Please join us at Wychwood Library on Sunday 9th December for this special event.
Posted by Wychwood Circle at 01:59